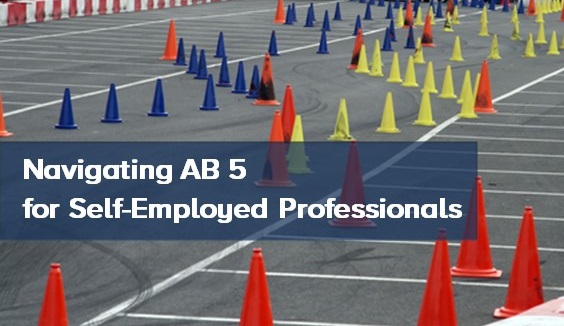 New law, AB5, makes it harder to be hired as an independent contractor. Here's what to do!

Under California’s new law, AB5, it’s going to be much harder to qualify as an independent contractor and get paid on a 1099 tax basis. Instead, the default will be for companies pay you on a W-2 basis like a temporary employee.

This is a big deal for self-employed professionals because how you are paid affects how much tax you pay. Generally speaking, you pay significantly less tax if you’re paid on 1099 tax basis, deducting your business expenses, and contributing to your own retirement plan. That’s why PICA’s motto is “Friends don’t let friends W-2.”TM

While the new AB5 law only governs work done in California, you can anticipate that other States will adopt similar laws (if they haven’t already), and that large corporations will adopt the new standards, even if they are headquartered outside California. This is because it’s safer for a national company to follow the strictest laws so they know they’re in the clear. (The fines and penalties related to misclassification can be massive.) So, even if you’re an independent consultant living outside of California, this law may affect you too.

Basically, AB5 means that if you are hired by a company, they are going to presume that you’re an employee, which means you get paid on a W-2 tax basis. That is the new default status. This means that in order to pay you on a 1099 tax basis, the hiring entity must prove why you are not an employee. It’s not enough for you to prove you’re an independent contractor; the hiring company must prove why you shouldn’t be paid like an employee. It’s a subtle difference but it makes all the difference. It’s always easier to go with the default answer, and now the default is that you’re an employee no matter where, when, or how you do the work.

Because the hired worker is now presumed to be an employee, the hiring company has the burden of proving that the worker is an independent contractor by showing that a three-part test is met, the “ABC Test”. The hiring entity must show that the you:

In addition to the ABC Test, there are some complicated exemptions for professional services contracts (like consulting), and for business-to-business contracting relationships. It’s complicated, which is why PICA offers a webinar to explain it. (The last one was on January 14; the next one will likely be in March.)

The bottom line is, at a minimum, you need to be an actual business if you want a chance of preserving your 1099 tax benefits.

Here are some of the things you can do to demonstrate that you are an independent business.

[Note: Nearly all of these factors are discussed in greater detail on the PICA website, especially in the Being a Business section.]

In summary, AB5 has made a bad situation worse. The new default for companies hiring outside workers will be to pay them on a W-2 tax basis like a temporary employee. Take steps now to improve your chances of remaining independent. The longer you can show that you have been engaged in an independent business, the more likely that the ABC test will be satisfied. There's a saying, "If it looks like a duck, walks like a duck, and quacks like a duck, then it's a duck." The same is true now for self-employed professionals. You need to look like a business, be set up like a business, and act like a business in order to be paid like a business.

CAVEAT: This "Legal Alert" provides information about a specific state law. It is not intended to be, and should not be construed, as legal advice for any particular situation. Your situation depends on your particular facts. Reading a summary of a specific law or court decision is no substitute for consulting with, and obtaining the advice of, a qualified employment attorney in the State or States in which you work and reside. Only an attorney can provide you with legal advice for your particular situation.

Create the consulting career of your dreams.